The publication has been designed at and printed with a risographer at Substitut from March 20th till March 23rd 2013 in the frame of the exhibition „Es liegt was in der Luft“. Every copy is handmade by the onlab team and Substitut. More images (und deutsche Info) here.
Order by mail: info@substitut-berlin.ch
25 Euro plus 3 Euro shipping costs (Europe; 7 Euro overseas) – first 150 ex come with a cotton bag 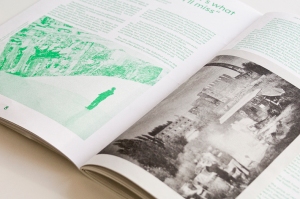 Limited, signed and numbered edition (25 ex) with cotton bag and a special: During the exhibition „Prospective (2013 – 2015)“ by Martin Schick, there are 125 5-Euro bills on display for sale. When someone buys them someday, everyone who has bought a limited edition will receive one bill to put into the book.
45 Euro plus (shipping costs incl. for Europe; 7 Euro overseas)

With texts by (English and German):

(excerpts below)
Claudia Wahjudi spoke intimately with Urs Küenzi about the Substitut and Berlin.
Emilia Sulek gives her view of the Substitut as both attendant and anthropologist.
Kordula Fritze-Srbic analyzes Berlin’s artistic landscape and the changes conditions in the independent scene.
Christian Saehrendt doubts that being an artist is a dream job but has a recipe for success.
Heinrich Gartentor is stuck in Mannheim and reflects over a caffè latte about Switzerland’s art system and his political career.
Sally De Kunst discusses via Skype with artist Maria Guggenbichler about the role of the curator and together they author a manifesto.

Excerpts:
Christian Saehrendt, „Dream job Artist”:
„(…) An artist is not automatically an artist. There are an ever-growing number of artists, but most of them only work in a semi-professional arena. They are artists by hobby, part time artists or remain local-level artists. At the top, however, there is as little room as ever. So, how does one attain the status of an internationally renown, appreciated by quality media sources and museums, and well-earning professional artist? The art business, to put it figuratively, works like a cartel of insiders: opinions of artists and evaluations of their works often are the result of rumor, informal agreements, personal tastes and personal relationships. The power structure in the art business seems to be invisible and is thus quite fascinating. (…)“

Sally De Kunst und Maria Guggenbichler, „Dialogue with Maria“:
„(…) Sally De Kunst: The crucial aspect of curating for me is hospitality. A strong artistic program can only take place in a friendly atmosphere, where a large audience, artists and other members of the community feel welcome. I perceive such hospitality as very explicit. In this regard, the English word „host“ refers to „the master of the house“, „the manager“, „the inn-keeper“, „the mentor“ or „the facilitator“. In recent decades, the role of the curator has expanded also to „producer“, „agent“, „DJ“ and to many other functions. It’s a very versatile profession. But for me the curator is in the first place the host of artists, the public and all other stakeholders.

Maria Guggenbichler:
Yes, I very much agree. Creating ghosts: a guest + a host = a ghost. (…)“

Heinrich Gartentor, „Café Latté and the Swiss art system „:
„(…) Now, I if I only were to get into politics and run for the 2014 legislative session for the Canton of Bern and supported the arts, one would expect me have a winning chance. This is because my face is widely-recognized in the public sphere and I am brought into debates already quite frequently—and not only when art is the topic of discussion. I am told, I could be trusted to breakdown the party barriers, because I so easily converse with all types of people. I’ve been contacted by organizations from the left to the Swiss People’s Party. I appear to be just as fit for consumption as my café latté. I would be, I am told, the political progeny of Albert Anker, who sat in the Canton of Bern’s legislature from 1870 to 1873 and advocated for cultural issues, especially for building an art museum in Bern.

Now, the Kunstmuseum Bern is also thinking about expanding, btw. The plan is in the works, the finances are unclear, about the high operational costs nothing is to be heard. I would not, if I were a politician, be able to follow in Anker’s footsteps; and today neither probably would he. (…)“

This site uses Akismet to reduce spam. Learn how your comment data is processed.