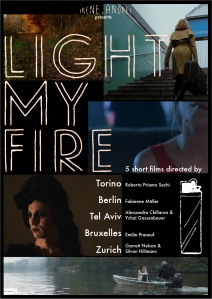 They showed me the short movie „Light My Fire“ they did together.
Nice cinematography. The story takes place in Tel Aviv where two men, one of them dressed in drag accidentally meet in the street (one lighting the others cigarette). One secretly follows the other and a dance of seduction begins.
Ychaï puts the focus on the mythical figure Lilith, played by the man in drag. The controversial potential of this choice is not really leading to new insights and the gay/gender/crossdressing/trans theme is overshadowing another understanding of the movie. Nevertheless a light and tender film.

Today I met Alessandra because she asked me if I would be interested in seeing one of her photographic works installed in „Au Quai“ in the neighborhood of Molenbeeck/Brussels.
Alessandra works with Camera Obscura technique. In times of Photoshop and Instagram this evokes a pleasant nostalgic feeling. But Alessandra resisted the temptation just to play with the seductive aesthetics. She roughly pasted the photos on the wall and created a nice juxtaposition. Souvenir and afterglow, ephemeral and unseizable; privacy and vulnerability, affectionate and explorative; are just some words running trough my head seeing Alessandra’s work.

* I met Ychaï also at la 21ème and was surprised that his partner, Alessandra is Swiss and I already met her in 2007. She was amongst the first winners of a study award of Migros culture percentage in movement theatre. I still organize this competition as an assistant.